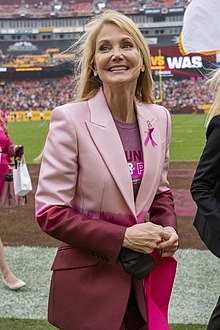 Tanya Snyder under fire for ‘hail to the Redskins’ remark

Tanya Snyder under fire for ‘hail to the Redskins’ remark

Washington Commanders co-owner Tanya Snyder found herself under fire over a controversial remark involving her franchise’s old name. During the Commanders’ Alumni Homecoming Weekend on Sunday, she said, “Hail to the Redskins.”

Washington used the name Redskins from 1937 to 2020. The team rebranded itself to Commanders following criticism over its old name, which was deemed offensive to the members of the Native American community. The National Congress of American Indians (NCAI) also acknowledged the name as a racial slur.

“It’s a day for us to celebrate the history, legacy, and tradition of the burgundy and gold. Hail to the Redskins, and let’s beat Green Bay,” she said.

Snyder received backlash on Twitter after a video of her making the remark surfaced online. However, the Commanders later confirmed that she had intentionally used the team’s former name. A team spokesperson told ProFootballTalk that it was Snyder’s way of “celebrating all our legends” who took part in the alumni rally.

“Yes, she did, celebrating all our legends, who were here for Alumni Homecoming Weekend,” the spokesperson said.

Many argued that it was inappropriate for Snyder to “celebrate” their former players in such a way, insisting that the name should not have appeared again in public.

“I just don’t understand. You change the name because of the many racial issues and how it offends some Native Americans, but then welcome the name back by saying “Hail to the R….,” said former ESPN sports anchor Darren Haynes.

“So involved in the day to day operations of the team that she doesn’t know the team’s name,” the Washington Post’s Jacob Bogage said.

The comment was made ahead of the Commanders’ 23-21 win over the Green Bay Packers. The team is now preparing to face the Indianapolis Colts at Lucas Oil Stadium on October 30.

“It is important we appreciate the fans who have come out to support these guys all the way from the Boston Braves to the Redskins to now the Commanders. We’re one family. This is one legacy. We promise to honor you all.” 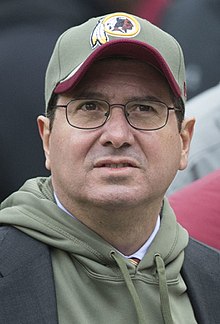