Cleveland Browns wide receiver Odell Beckham Jr. appeared to be in good shape when he spoke to local reporters on Thursday.

Beckham, who suffered an ACL injury back in 2020, has shown tremendous progress in his recovery. However, head coach Kevin Stefanski is still uncertain if Beckham will play this Sunday.

“I’m not ruling him out,” Stefanski said Wednesday. “He’s working really hard. He has a ton of reps between just him and Baker (Mayfield). Has gotten a ton of reps in seven-on-seven and the team drills. I think the guys recognize that he’s a dynamic football player.”

The 28-year-old fully participated in Wednesday’s practice session, which is another big step for Beckham after being absent for nearly a year.

Beckham, when asked about his current situation, is confident that everything is on the right track.

“Everything is going smooth,” Beckham answered. “It’s just been part of the progression the entire time, just working my way back into it. Everything feels good, so I’m just taking it day by day.”

The three-time Pro Bowl player is fully aware of his responsibility off the field as well.

“I know that I have a responsibility (for them),” Beckham said, “and I don’t take it lightly. For the kids out there who want to give up on something, that was all I could think about: What message do I want to send to them by giving up now?

The Cleveland Browns host the Chicago Bears at FirstEnergy Stadium this Sunday. 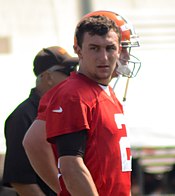 #Browns Odell Beckham Jr. said he's "taking it a day at a time" and that "we'll see" if he plays on Sunday against the Bears.

I legitimately hate injury designations that aren’t “out”. So much stupid mystery

They’re all going to play

#Browns OBJ: "We’ll see" about playing against the Bears

Story: 'A day at a time': #Browns Odell Beckham Jr. working hard but uncertain for Sunday return against Bears

'A day at a time': Odell Beckham Jr. working hard but uncertain for Sunday return against Bears