Denver Broncos quarterback Russell Wilson has decided to weigh in on the comments made about him by former NFL pro Eli Manning.

In response, the QB clapped back at Manning’s statement about his $245 million contract extension inked with the Broncos earlier this month.

“They should have paid that punter $235 million instead of Russell,” Manning said, meaning the team should instead pay Belgian-born punter Corliss Waitman.

When Wilson was asked by reporters about his thoughts on Manning’s statement, the 33-year-old took his time to pull out a hilarious response, saying that he bested Manning’s record with the New York Giants when he was still playing with the Seattle Seahawks.

“You’re talking about Chad Powers? I’m 3-0 against Chad Powers,” Wilson said, referring to Manning’s undercover identity when he went to Penn State as a walk-on prospect in a recent episode of a TV series titled Eli’s Places.

Wilson then continued that he is not “stressing about” Manning’s statement and his jab at the former pro should not be taken seriously since it was only made for fun.

In the end, the nine-time Pro Bowler has huge respect for Eli and his older brother Peyton, who is a former Broncos QB and a Hall of Famer.

Similarly, Eli has since responded to his original statement that he was not trying to be critical of Wilson. He admitted it was a “very outrageous joke” and he has nothing against the former Seahawks quarterback.

“Listen, it’s part of the game and you just have to have fun. I have a lot of respect for Peyton Manning and Eli. I’ve always looked up to those guys. I’m not stressing about it.”

“I think we always try to support the guys that are in the game. I think sometimes, ‘Hey, it’s live TV.’ I never try to take a real shot at somebody. I think that was obviously a very outrageous joke — because a punter had 10 punts. Nothing against Russell. He’s going to do great.” 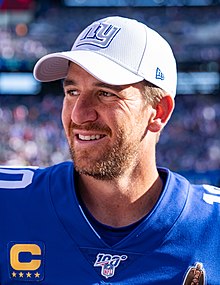 Russell Wilson went the comedic route when responding to Eli Manning's dig at his Broncos contract.

Your tweet was quoted in an article by nesn

Russell Wilson was ready with the receipts for Chad Powers