“I live for those kinds of moments,” Stafford said, who completed a pass to Cooper Kupp that set up the field goal attempt. “I would have loved to have been taking a knee when you’re up by three scores, but it’s a whole lot more fun when you got to make a play like that to win the game and just steal somebody’s soul.”

With the victory, Los Angeles is set to play the NFC championship title game against the San Francisco 49ers next Sunday at SoFi Stadium. The Rams have defeated the 49ers the last six times they’ve played.

The Rams were leading by 24 points in the third quarter before the Bucs made a comeback to tie the game. But, Tampa Bay gave Los Angeles just enough time left on the clock to get the win.

The star of the game was Stafford, who managed to throw two touchdown passes and rush for another. He was supported by the Rams offensive line, which had an outstanding game, and a defense that sacked Brady three times and intercepted him once. 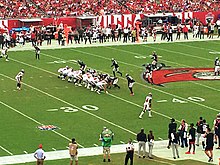 "I would've loved to have been taking a knee up three scores, but it's a whole lot more fun when you've got to make a play like that to win the game and just steal somebody's soul." Story on the Rams advancing to the NFC title game in dramatic fashion:

https://espn.com/nfl/story/_/id/33133867/los-angeles-rams-outlast-tampa-bay-buccaneers-earn-opportunity-host-nfc-championship-game… Congrats to the Rams fans, players and coaches on making it to the NFC Championship Game!