Baker Mayfield seems to have reached a point of no return with the Cleveland Browns. The quarterback wants to leave the team as soon as possible.

The No. 1 overall pick in the 2018 NFL Draft made this comment after the Browns were reportedly looking for his replacement in Houston Texans quarterback Deshaun Watson.

Watson eventually was not interested in joining Cleveland as he is more inclined to join the New Orleans Saints, Atlanta Falcons, or Carolina Panthers, according to multiple reports.

The 26-year-old Mayfield could be stuck in Cleveland for now as the Browns are reportedly “not accommodating his request,” as per ESPN’s Jake Trotter on Thursday.

Mayfield also posted a thank you note to his social media accounts and many believe that this could be his last post as a Browns’ player.

“Cleveland will always be a part of Emily (Mayfield’s wife) and my story,” he wrote. “And we will always be thankful for the impact it has had and will have in our lives.” 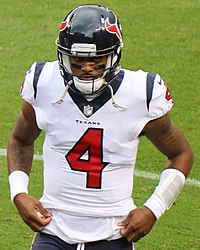