On Saturday, the 21-year-old Polish phenom powered her way to the French Open title with a 6-1, 6-3 win in only 68 minutes at Roland-Garros over the USA’s Coco Gauff.

With the win, Swiatek won her second Grand Slam title, her sixth tournament in a row, and her 35th match victory in a row, which equals Venus Williams’ record for longest winning streak by a woman in the 21st century.

Over the past five years, as the women’s tennis champion’s carousel has been passed around, very few favorites have been able to handle the billing and the hype that comes with it as she has done.

“Before, tennis was not the main part of her life. It was difficult. Imagine – practice at seven in the morning, because she had to go to school afterwards. And she arrived tired, because she had had to study at night,” said her then trainer Piotr Sierzputowski.

There is a new bully on the block

Every generation, there is a player whose sheer passion and performance makes them a dominant force in women’s tennis.

During the last two decades, it was Serena Williams. Iga Swiatek promises to be another such prototype.

Swiatek enjoyed modest success during her first year on tour in 2019, with a fourth-round appearance at Roland Garros and her first WTA final appearance in Lugano. Her career progressed steadily.

When she arrived in Paris two years ago, she was a virtual unknown. She entered the tournament ranked No. 54 but stunned the field and left as the champion.

Polish Royalty in the House

French Open champion Iga Swiatek said that she was ‘overwhelmed’ upon learning that Poland’s Bayern Munich striker Robert Lewandowski was on hand to to watch her win her second Grand Slam title in Paris.

Lewandowski is considered one of the best strikers of all time, as well as one of the most successful players in Bundesliga history. He has scored over 600 senior career goals for club and country.

"I am happy that he is here honestly. I do not know if he is a huge tennis fan or not. But I mean, Wow! He has been a top athlete in our country for so many years that it still feels like, it is hard to believe that he came to watch me. Just overawed."

This is starting to trend

At 21, Swiatek has won 56 of her past 58 sets on the WTA tour, a feat that even Serena Williams has achieved so early in her career – that’s how dominant Swiatek has been.

In the French Open, her domination was astounding. Swiatek broke her opponents in all of her seven matches in the very first service game. Swiatek won 54-percent of her points on Coco Gauff’s first serve and 53 percent on her second serve in the final.

The Polish star is now even with Venus Williams’ record of 35 straight wins with Saturday’s win on Court Philippe Chatrier.

During the French Open, Swiatek wore a ribbon in Ukraine’s colors to express solidarity with the neighbouring country.

On the podium on Saturday, as she received her second French Open trophy, she cried, she laughed, she was awkward, she was sensitive.

After winning the French Open, Polish World No1 @iga_swiatek ended her speech with a message for Ukraine.

She has been drawing attention to the Russian invasion since day 1, bringing it up in her winning speeches and playing with a Ukrainian ribbon.

"I wanted to say something to Ukraine, to stay strong, because the war is still there."

"I think her athleticism is very off the charts. I think her defense is really, really, really good, kind of similar to like an Ashleigh Barty where they have offense and defense, they can get in the corners, dig out the points, play really good defense and then also take the racket out of your hands sometimes. And then I think she's gotten much more offensive this year, been more aggressive when she's needed to be."

As the season transitions to grass, all eyes will be on Swiatek. This year will be her second Wimbledon appearance. In 2018, she won the junior title at the All England Club and reached the fourth round last year. She is already the favorite to win the title this year, according to Caesars Sportsbook, despite having limited experience on the surface.

"So together with my team we just try every single day, step by step. And here we are – in this amazing moment, with this incredible achievement. It's time to reflect on that a little bit, enjoy, click "pause" It's time for us to reflect on it and to enjoy it, to click "pause," to rest and to cherish each and every one of them." 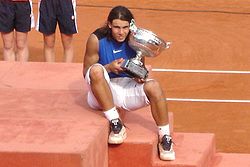