Oneil Cruz impressed both at the plate and on the field in his first game since being called up from the minors, leading the Pittsburgh Pirates to a 12-1 victory over the Chicago Cubs at home on Monday.

The 23-year-old star prospect faced the tall task of living up to the hype in his season debut. His performance was impressive.

Fastest of the Season

The 23-year-old Cruz first raised eyebrows in the third inning when he threw out the Cubs’ Willson Contreras at first base with a 96.7 mph laser. The infield throw was the fastest of the MLB season, and it was just 0.6 mph behind the fastest since the stat was first recorded.

It's Oneil Cruz's first game of the season and he already recorded the hardest throw by an infielder this year at 96.7 MPH 🤯 pic.twitter.com/5XUlqHRjac

"I knew it was hard, I didn't know how hard it was. It's like, "You had to do that to me? You had to throw one harder than I threw it off the mound?"

Chavis said opponents who reach first base also were impressed by Cruz’s 6-foot-7 frame, which makes him the tallest shortstop in major league history.

The bottom of the third inning was majestic. While the bases were loaded, he rocketed a ball past the center fielder to drive in three runs. The bases-clearing double registered as the hardest-hit ball by a Pirate player this season (112.9 mph), and on the play, he recorded the team’s fastest sprint speed of the year. Being able to watch someone who was built like an NBA power forward round the bases quickly made it seem as though no one cared at all that he was thrown out trying to stretch it into a triple.

112.9 MPH off the bat of Oneil Cruz for his first hit of the season 😳 pic.twitter.com/XWM8ZIGrlK

Cruz batted .232 in 55 games for Triple-A Indianapolis this season, hitting nine home runs and driving in 35 runs. He played for the Pirates for the final two games of last season.

Prior to this season, Baseball America and MLB Pipeline ranked him among the top 100 prospects in each of the past four years, peaking at No. 14 and 26, respectively. In 459 minor league games, he hit 58 home runs, stole 71 bases, and posted an .800 OPS, and showed off his many tools in a brief two-game call-up at the end of last season. He is here now, and his 2022 debut screamed way beyond the hype already prevalent. 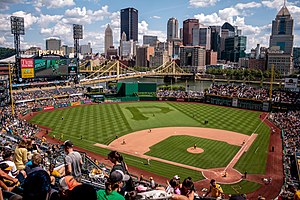 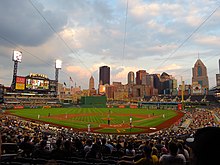 Oneil Cruz could be baseball's next big star

Have a day, Oneil Cruz!

A record-setting throw, at that.