The Colorado Rockies have decided to retain left-handed pitcher Kyle Freeland and signed him to a five-year contract extension worth $64.5 million, as per ESPN’s Jeff Passan.

“We have been in talks with Kyle for a long time and are glad to finalize this deal that secures his future in Denver,” Rockies general manager Bill Schmidt in a statement. “Kyle has been a steady part of this rotation since his debut and we are excited to have him in a Rockies uniform for at least the next five seasons.”

Freeland appears to have a good relationship with Colorado ever since he debuted in April 2017 despite a slump performance with the franchise throughout this season.

According to Passan, the 28-year-old’s contract includes a sixth-year option, making the professional pitcher stay with the franchise in a long run, at least until 2026.

Additionally, the Denver-native is qualified for a pay raise if he is able to pull out 170 innings by 2025. According to Jon Heyman of the MLB Network Insider, Freeland is slated to receive an additional $17 million should he succeed. Thus, the total amount the player can cash in is $81.5 million.

Reportedly, Freeland was at risk of heading into free agency prior to the contract extension. However, it appears that is not the case, since the Rockies star pitcher is joining his three other fellow teammates, Kris Bryant, Ryan McMahon and Antonio Senzatela which the franchise has reserved until 2026.

"We have been in talks with Kyle for a long time and are glad to finalize this deal that secures his future in Denver," 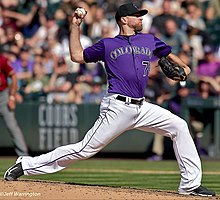 News on Kyle Freeland's big extension with the Rockies for five years and $64.5 million, free at ESPN:

The Rockies locked up a pitcher?!?!