McDowell, who was a second-round draft pick by the Seattle Seahawks in 2017 out of Michigan State, got a second chance in the NFL earlier this year with the Cleveland Browns after he sat out of football for a few years.

McDowell played in 14 of the 15 games this season and had 33 tackles, three sacks and five quarterback hits.

The Browns issued the following statement on McDowell’s arrest:

“We are aware of the very concerning incident and arrest involving Malik McDowell and are in the process of gathering more information. We understand the severity of this matter and our thoughts are for the well-being of all involved. … No further comment at this time.” 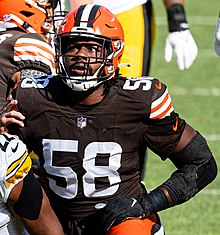 Calling on @Browns to make a $100,000 donation to @NLEOMF If you hire a career criminal with a history of assaulting police officers, and that criminal goes on to assault more officers while on your payroll, you are accountable. RT if you agree

CRIME ALERT: Browns defensive tackle Malik McDowell is behind bars after authorities said he walked into a Broward children’s learning center naked and attacked a deputy

What a tremendous waste of talent and opportunity. Mental health is important & I hope he gets help. But his career surely is over now…

Former Seahawks Draft Pick, who never played for the team, in trouble again. Via @espn

The Browns are the new Bengals.

Aaaaaaaaaaaand the Football Gods are back to shitting on the Browns. Will their suffering ever end?