Can Current NBA Players Adapt To The Triangle Offense?

Can Current NBA Players Adapt To The Triangle Offense?

I found this really insightful article written  by Harvey Araton of the New York Times.

Phil Jackson has successfully implemented the triangle offense with his previous teams.  I guess Michael Jordan and Kobe Bryant had a little to do with the smooth transitions.  Is it reasonable to think he can do the same with the Knicks?  I am not so sure. 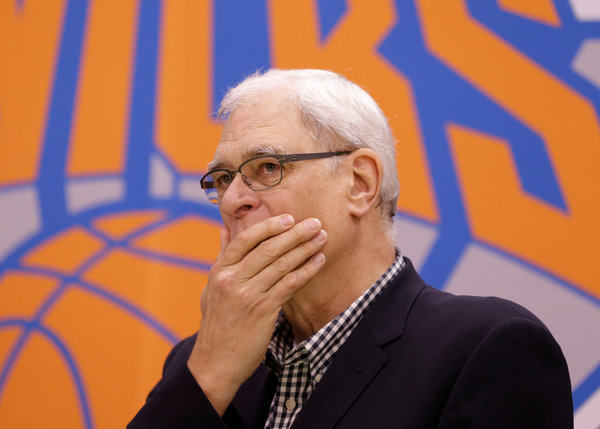 There were 60 million good reasons for Phil Jackson to accept the formidable challenge of rebuilding the Knicks along with one intangible benefit that could not be banked. Some might think the one he chose, however, borders on obsession: to resurrect his beloved triangle and prove to the world that it is an offense for the ages.

Many of Phil’s proteges (Bill Cartwright, Kurt Rambis and Jim Cleamons) have tried to institute the triangle and have failed.  Some don’t even use it such as Steve Kerr with the Golden State Warriors.  Sometimes leagues go through phases where the style of play just changes.  See the NFL.

The most noteworthy apple to fall from the Jackson coaching tree has been Steve Kerr, who is enjoying a rousing debut season with Golden State. But Kerr, who also played for Popovich, rejected Jackson’s offer to coach the Knicks and did not install the triangle with the Warriors. Implicitly, Kerr was saying that the triangle is no one-size-fits-all formula, or that it did not make sense to force change upon the young shooting stars Stephen Curry and Klay Thompson.

Many American-born NBA players new to the league don’t seem to be as fundamentally developed as they used to. The International players though do seem have these skills necessary to live in the triangle offense.  Maybe AAU basketball and the “one and done” have something to do with it.  I think so.

“It’s really hard to run the triangle with bad players because most bad players don’t understand the game,” said Jerry Krause, who as general manager endorsed Jackson’s use of the offense with the Bulls, in order to integrate Michael Jordan’s otherworldly skills into a more cohesive attack. “You’re not going to win with bad players running any system. But with the triangle you particularly have to have intelligent players who can be patient. And I’m not talking about math intelligence. I’m talking about basketball intelligence.

It is going to be very interesting moving forward to see if Jackson stays committed to the triangle or adapts to a new style.  I know I will be paying close attention to his future roster moves.  If the current trends of of lacking skill sets continues, I have my doubts.  Try running the triangle in a square garden!

[btn type=”default or primary or success or info or warning or danger or link” link=”http://www.nytimes.com/2015/02/04/sports/basketball/phil-jackson-is-out-to-prove-that-his-signature-offense-still-fits.html?ref=topics&_r=0″]Read the full story here[/btn]